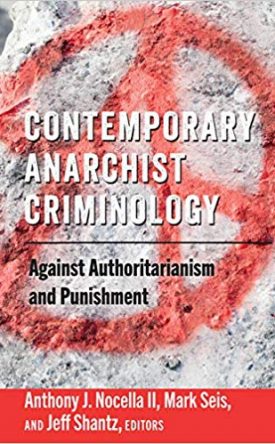 “A straightforward short important text to beginning the movement for anarchist criminology. This text does not strive to discuss every issue that could be possibly discussed, but rather says here is the first book on the topic; now everyone go out and write and organize.”―Green Theory and Praxis Journal

“This book is a much-needed defense of the work we do nationally in ending the incarceration of all youth and promoting transformative justice.”―Madelynne Kinoshita, Save the Kids

“We live in increasingly illiberal times. According to the CIVICUS ‘State of Civil Society Report’ for 2017, only 3% of the world’s people live in nation-states where civic space is fully open. There is a need to look for alternative intellectual and institutional models that will increase the space for broader public engagement, allowing for the attainment of greater social justice. Contemporary Anarchist Criminology contributes significantly to this search, introducing readers to a range of voices, ideas, and arguments seldom, many of them with a long lineage, and yet seldom heard within the mainstream of conventional wisdom regarding our criminal justice system. The introductory chapter by the editors, plus the nine chapters by various contributors, including present-day prisoners, offer a compelling critique of current ideologies, policies, and practices, while furnishing humane and doable paths for action.”―A. Peter Castro, Associate Professor of Anthropology & Robert D. McClure Professor of Teaching Excellence, Maxwell School for Citizenship and Public Affairs, Syracuse University

“Contemporary Anarchist Criminology is a brilliant, insightful and uncompromising collection, which both empowers and inspires the reader in equal measure. First, by provoking an urgently-needed critical reading of the deep and inherent failings of orthodox judicial systems to come to the fore. Second, through advancing a range of persuasive arguments for anarchist criminologies to underpin new visions, and animate new ways-of-beings, in order to usher in new forms of social justice into the world. Crucially, these radical expressions of social justice, rooted as many are in intersectional resistance movements, and steeped in a politics of total liberation, are always in existence far removed from the twin tyrannies of capital and state. In short, this book makes a powerful and timely intervention into the existing literature, and deserves to be read widely.”―Richard J. White, Reader in Human Geography, Sheffield Hallam University, United Kingdom

“The editors and authors in Contemporary Anarchist Criminology are unwavering in their fearlessness to throw bold punches at authority and convention. Where many may not understand, their approaches and position deserve careful consideration in these most uncertain times.”―David Stovall, Professor of African-American Studies and Educational Policy Studies, University of Illinois at Chicago

“This valuable collection presents a strong critique of structures of oppression and injustice. It introduces important new perspectives that are vital for building a critical criminology and for creating much-needed radical transformation.”―John Sorenson, Professor, Department of Sociology, Brock University

“Finally, the first book on anarchist criminology!! What took so long. Now can we have prison abolition? A must read for anyone that cares about people.”―Editorial Board, Poetry Behind the Walls

Anthony J. Nocella II, Ph.D., is an Assistant Professor of sociology, criminology, peace and conflict studies, environmental studies, and gender and women’ studies and Fort Lewis College and is the National Coordinator of Save the Kids and Executive Director of the Institute for Critical Animal Studies.

Mark Seis is Associate Professor of sociology at Fort Lewis College in Durango, Colorado. He has published on a variety of topics ranging from the juvenile death penalty to environmental policy. His primary research interests include sustainable communities, all things environment, anarchist studies, and radical pedagogy.