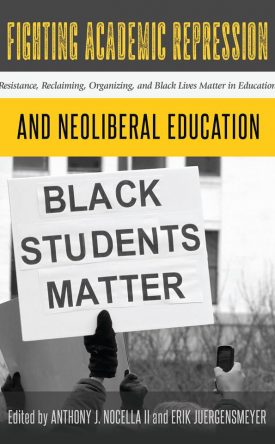 Fighting Academic Repression and Neoliberal Educationis a cutting‐edge investigation of the alarming state of education today. This practical how‐to handbook gives readers tactics and strategies to organize and challenge forces that threaten liberatory critical education. Drawn from scholars and activists from across the world, the ﬁfteen chapters guide readers through a strategic method of understanding the academic industrial complex and corporate education in the twenty‐ﬁrst century. Education is being hijacked by banks and corporations that are tearing apart the foundational fabric of academic freedom, resulting in mass standardized education and debt for all students and furthering racial inequity. This is a must‐read for anyone interested in democracy, education, social justice, critical pedagogy, and Black Lives Matter.

“Anthony J. Nocella and Erik Juergensmeyer expose the major fault lines in the current debates and conﬂicts in education as they highlight the spaces of critical resistance with clarity and courage, and illuminate the way forward for social justice advocates and activists. “Fighting Academic Repression and Neoliberal Education” is an essential weapon in the ﬁght for an education of meaning and purpose—learning and teaching constructed on the twin pillars of enlightenment and liberation”

“Fighting Academic Repression and Neoliberal Education strips away the illusion that academic sites are places of democratic deliberation in the service of the public good. Too often they are calciﬁed places of learned intimidation and truncated spaces of sophisticated brutality in the service of the cognitive elite in bed with monster corporations. Clearly it is time to take back the neoliberal university from the academic hucksters and hustlers who proﬁt from the reproduction of the dependent hierarchies of race, class, gender and sexuality. Fighting Academic Repression and Neoliberal Education is a crucial actor in the ﬁght for social justice on campuses and beyond.”

1. Striking Out! Challenging Academic Repression in the Neoliberal University through Alternative Forms of Organizing: Some Lessons from the UK
Nick Clare, Gregory White, and Richard J White

4. On Identity Politics, Resistance, and the Evacuation of Human Emancipation
Camila Bassi

10. One of the Best Contracts in the Nation?: How Part-time Faculty Organized for a Collective Bargaining Agreement
Diana Vallera

11. Organizing Adjuncts and Citizenship within the Academy
Sean Donaghue-Johnston and Tanya Loughead

13. Racial Harassment in the ‘Post-Racial’ Era: A Case of Discipline and Resistance in the Black Female Body
Shannon Gibney