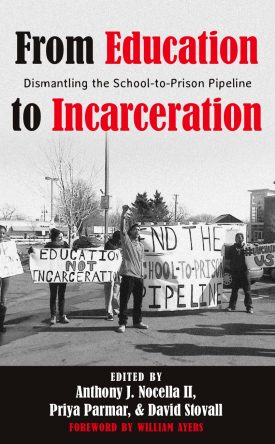 From Education to Incarceration: Dismantling the School to Prison Pipeline

PART I.
THE RISE OF AN IMPRISONING YOUTH CULTURE

CHAPTER ONE
Criminalizing Education: Zero Tolerance Policies, Police in the Hallways, and the School to Prison Pipeline
Nancy A. Heitzeg

CHAPTER THREE
Changing the Lens: Moving Away from the School to Prison Pipeline
Damien Sojoyner

CHAPTER NINE
Who wants to be Special? Pathologization and the Preparation of Bodies for Prison
Deanna Adams and Erica Meiners

PART IV.
BEHIND THE WALLS

CHAPTER TWELVE
At the End of the Pipeline: Can the Liberal Arts Liberate the Incarcerated?
Deborah Appleman, Ezekiel Caligiuri, and Jon Vang

CHAPTER FOURTEEN
Back on the Block: Community Re-entry and the Re-integration of Formerly Incarcerated Youth
Don C. Sawyer III and Daniel White Hodge

“This book provides a serious and necessary investigation and critique of an inhumane and morally bankrupt system. The combination of a broken education system and a for-profit prison system leaves innocent kids to fend for themselves. From Education to Incarceration cuts through the propaganda and exposes the complexity of issues that contribute to one of America’s biggest problems. This book will arouse the passions and incite a righteous indignation.”

“At a moment when racial justice language is too frequently co-opted by corporations selling easy solutions, this collection provides a much needed jolt of fearlessness, unapologetic truth-telling, and outrage. This book will be a valuable resource for activists combating the classroom-to-prison pipeline, and a vital corrective for an education debate that too often avoids confronting the full complexity of injustice in our educational and criminal justice systems. ”

“In a world where ‘school-to-prison pipeline’ is too easily another meme emptied of meaning, this book unveils the violence perpetuated on youth through dehumanizing educational policies and the racism, market ideology and surveillance culture from which they emerge. Written with clarity and passion, readers will be moved to outrage and action.”

“An impressive contribution to policy discussions on the facts and myth of school violence and safer schools for children by notable experts and scholar-activists. The contributors demonstrate effectively that in the post Columbine era, political litmus tests of “zero tolerance” amount to “zero logic”— they represent imprisonization and militarization strategies of staggering proportions. Helpfully, authors point to alternative, peaceful models, to schools that opt out of “zero tolerance” and refuse to dehumanize children of color. An important book for anybody concerned about the state of education in the United States.”

“How did we become a society that handcuffs its young and warehouses them in penal institutions instead of educating them? From Education to Incarceration answers that questions and offers an intelligently crafted overview of how ill-advised and inhumane practices and policies in the United States have betrayed generations of young persons, with suggestions for how we can upend these transgressions. Educators, attorneys, youth organizers and many others write with authority and conviction in this timely, relevant and eminently readable book.”

“This compelling collection of voices of radical educators could not arrive at a more urgent time. It serves as a clenched fist with the power to break ideological chains. Read it, and take back our schools!”

“Moving us beyond simple rhetoric and buzzwords, From Education to Incarceration is a powerful treatise for transformative schools, offering vital perspectives and revolutionary alternatives from some of our time’s most influential thinkers on the subject of schools and mass incarceration. This compilation is a must read for anyone passionate about social justice and education in the United States.”

“Activists oppose oil pipelines as environmental death sentences; they confront transport that pushes profits and products before life with the clear understanding that to destabilize a healthy environment is suicidal. The school to prison pipeline is also life-threatening: There is the free, vibrant child who blossoms; there is the caged, captive child who withers. From Education to Incarceration reminds us that the only adequate response to children’s exploitation and violation, in school and out, is to protect our most precious natural resources with profound courage and love.”

“The authors, activists, and educators who gather their voices for From Education to Incarceration paint a clear, devastating picture of the way systems and the people who profit from their corruption create and then target disenfranchised youth. But what makes this book unique is that they do more: they equip us with the tools to fight back. That is invaluable, and why everybody who cares about youth should read this book.”

“School-to-prison pipeline is not a metaphor for research, it describes the brutal realities of imprisonment and the injustice, impoverishment and racism integral to it. The activists and educators collaborating in this powerful project help us understand how the once dystopian prospects of prisons-for-profit, the normalisation of surveillance, the criminalisation of youth and routine legal violence have become part of everyday experience, albeit one partially hidden from advantaged groups.”

The criminalization of youth behavior is a form violence and oppression common mainly at poor school communities. This much needed book exposes these practices and we hope it will contribute to put an end to the school to prison pipeline.

– Dr. César A. Rossatto, editor of “Teaching for a Global Community: Overcoming the Divided and Conquer Strategies of the Oppressor”

“Nocella, Parmar, and Stovall have assembled an impressive group of authors for this amazing collection. While the fearful defenders of corporate rule will condemn the critical linkage of scholarship and activism represented here, anyone who still believes in a humanist vision of hope will find these essays invaluable for contemplating the scale of the challenges ahead.”

– Dr. David Gabbard, co-editor of “Education as Enforcement: The Militarization and Corporatization of Schools”

“From Education to Incarceration: Dismantling the School to Prison Pipeline addresses a complex, entrenched and socially debilitating issue, one that needs to be placed within the context of inequitable power relations, social (in)justice, neoliberalism and the position of the United States as a world hegemonic force. The editors have skillfully brought together a range of scholars and activists to examine and critique the meaning of incarcerating such unparalleled numbers of society, and have honed their gaze on the disproportionate and insidious reality about who is victimized, how, and. importantly, the linkage to and through education. This is an important book for those concerned with seeing education become a pillar of the solution to diminish imprisonment as a viable strategy to constructing a society as opposed to being a cause of marginalization and disenfranchisement.”

“From Education to Incarceration presents an extremely timely examination of the connections between schooling and the atrocities of the modern prison industrial complex. Anthony J. Nocella II, Priya Parmar, and David Stovall have assembled a text that not only presents the problems with a “prison” system but also offers helpful examples for how we, as educators, can reclaim education from the clutches of neoliberal schooling.

“Public schooling is divided along razor sharp lines. Schools do skills training, and depending on where a child is, some limited intellectual training. In public schools, the key issues of life: work, production and reproduction, rational knowledge, and freedom, are virtually illegal. The shorting machine of schools serves to train the next generation of workers from pre-med or pre-law in affluent neighbourhoods, to pre-middle class teacher training and for many in urban and rural areas pre-military schooling and pre-prison education. Contributors to Education to Incarceration describe and decontruct how for many students the promise of public education is merely bigger cages and longer chains.”

As a social worker that mentors and consults youth on probation, I have been in desperate need of a book that articulates all the problems of schools and the juvenile justice system to city policy makers. From Education to Incarceration is a must read for educators and policy makers and a 101 manual for community organizer working with youth to dismantle once and for all the school to prison pipeline.