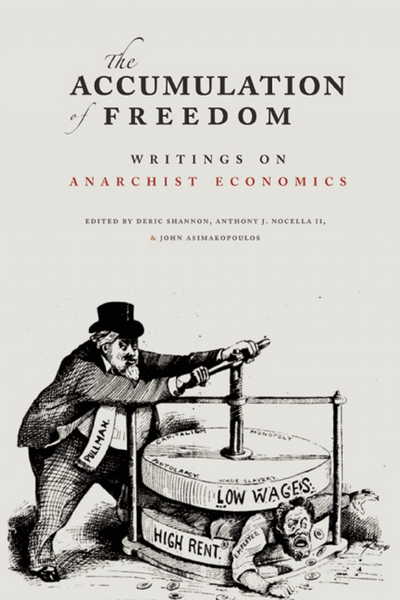 The Accumulation of Freedom: Writings on Anarchist Economics

The only crisis of capitalism is capitalism itself. Let’s toss credit default swaps, bailouts, environmental externalities and, while we’re at it, private ownership of production in the dustbin of history. The Accumulation of Freedom brings together economists, historians, theorists, and activists for a first-of-its-kind study of anarchist economics. The editors aren’t trying to subvert the notion of economics—they accept the standard definition, but reject the notion that capitalism or central planning are acceptable ways to organize economic life.
______________________________________________

1. Examining the History of Anarchist Economics to See the Future
Chris Spannos

3. Capitalism in the 2000s
Abbey Volcano and Deric Shannon

6. Globalized Contradictions of Capitalism and the Imperative for Epochal Change
John Asimakopoulos

8. Education’s Diminishing Returns and Revolutionary Potential in the US and Beyond
William T. Armaline and William D. Armaline

12. Call It An Uprising: People of Color and the Third World Organize Against Capitalism
Ernesto Aguilar

PRAISE FOR “THE ACCUMULATION OF FREEDOM”
Nothing lasts forever, and there seems every reason to believe in a generation or two – and maybe much quicker – capitalism will be gone. My worry is the next thing they come up with might be even worse. High time we have people seriously thinking about something that might actually be better. May others be inspired to do likewise.

– Dr. David Graeber, author of “Fragments of an Anarchist Anthropology”

The Accumulation of Freedom fills a vital need for beginning a serious dialogue about alternatives to capitalist globalization and the continuing ruthless exploitation of labor and natural resources. This is a comprehensive guide for all of us to think about how we might create not only a sustainable future, but one based on justice, community and freedom.

An important contribution to this growing field, moving beyond simplistic debates on anarchism to explore its deeper roots, models of economic sustainability and radical democracy and utopian promise.

_____________
The Accumulation of Freedom comes along at precisely the right historical moment, illuminating the sad ruins of global capitalism with hope and possibility. An invaluable chronicle and an inviting call to action.

A transformative book for academics and activists alike. Asimakopoulos, Nocella, and Shannon show us a new egalitarian economy, rather than being utopian, is within our reach. Now the question is do we wish to continue suffering under the current capitalist dystopia?

A must read book for anyone that wants to live a life free from debt, joblessness, and bankruptcy. The editors and authors of this book show us an alternative to this economic crisis, the question is will we take it?

Given the vast overburden of tomes delineating every theoretical nuance of “free market,” mixed, and marxian economies, material addressing anarchist alternatives has always been rendered conspicuous by its absence. Shannon, Nocella, and Asimakopoulos’s The Accumulation of Freedom fills the void rather neatly, providing a broadly-framed and accessible survey of this crucially important field. The essays collected herein are must reading for anyone and everyone wanting to participate in the creation of a viable future for life on this planet.

_____________
This splendid book offers an excellent historical and theoretical overview of anarchist economics. The Accumulation of Freedom is indispensable to the exciting activist work that is redefining the way we think about the economy in a society free of domination and exploitation.

The world economic crisis is exposing the true destructive nature of capitalism. The Accumulation of Freedom brings together scholars, economists, and activists to demonstrate an alternative economic system based on anarchist principles of cooperation, solidarity, and equality.

The crisis in capitalism has meant that it has become quite common in struggles for people to ask what our concrete economic alternatives are, both in the short and long term. When you get beyond slogans this isn’t always an easy question to answer. The modern economy is fantastically complex, perhaps 10 million workers are directly involved in the production of a laptop for instance. This volume is an important contribution to understanding what anarchists advocate.

Finally, a volume that does not treat anarchist economists like zoo specimens, but amplifies their powerful calls for a more just world.

_____________
Shannon, Nocella, and Asimakopoulos have compiled an outstanding resource during a global economic crisis that needs not mere finger pointing, but solutions. With an international line up of leading anarchist thinkers, The Accumulation of Freedom provides governments, citizens, and the general global community alternative, inclusive, and ethical ways in developing an economy based on aid rather than greed.

_____________
There’s never been a better time for anarchists – and everyone else – to get to grips with economics. Changing the world means understanding it. And – finally! – here’s a useful step in that process.

_____________
With the rise of the second great depression that spans the globe, leading anarchist economists brilliantly explain how greed, global corporatization, and governments that run on the belief of profit over people have left tens of millions around the world jobless, homeless, and foodless. This book needed to be in the hands of every individual in the world, especially the poor years ago. A required reading for Obama!

This is an amazing, timely, and important book, providing a needed alternative perspective on the future, if we are to have one.

The publication of The Accumulation of Freedom is timely. A text that explores widespread misunderstandings about anarchy and anarchic thought is most welcome, and this one is particularly valuable due to its impressive synthesis of historical material, reflections on issues such as ‘globalisation’, and contemporary themes.

With state-managed, laissez-faire, and welfare economics all being discredited over the last few decades it is high time that a more inclusive and sustainable economic system is introduced – anarchist economics. Instead of complaining and pointing and blaming, the editors of this outstanding resource promote a global economic alternative by leading international thinkers.

Capitalism is broken, and alternative economic systems are both possible and necessary. Read this book and let’s build a future together.

The Accumulation of Freedom is a timely intervention that offers a discussion of credible and compelling social alternatives – beyond mere conflict management, regulation and democraticisation. Bursting out of the straightjacket of organised and orthodox ideologies, Shannon, Nocella, and Asimakopoulos bring together scholars and activists from different tendencies of the anarchist movement to demonstrate that it is not anarchism that is chaotic and destructive but rather capitalism. Bridging the gap between a pristine anarchist theory and a messy anarchism of the streets, this book is a must read for those interested in working together to build new forms of radical politics that have the power to remake the world.

This book addresses a broadening interest in anarchism — as both theory and politics — in the wake of the deepening economic and social crisis in the United States and elsewhere. It is a very timely collection of articles by first-rate writers that boldly confronts the urgent need for a fundamental alternative to the existing bankrupt power structure.

Finally, we have a scholarly work that looks at anarchism as a serious and important theoretical paradigm rather than as a secret society for terrorists. My hat is off to the editors and authors.

As leading UK bankers breathe a sigh of relief and indulge once more in porcine bonuses, millions of workers and students face unemployment, debt and cutbacks in state services. This book points towards an economy of sustainability beyond capital’s social universe. Shannon, Nocella, and Asimakopoulos have produced an important book for our times.

This book serves an important task: to debunk the stereotypes about anarchism and show its genuine promise in reorganizing the global economy by promoting the fundamental principles of equity and justice.