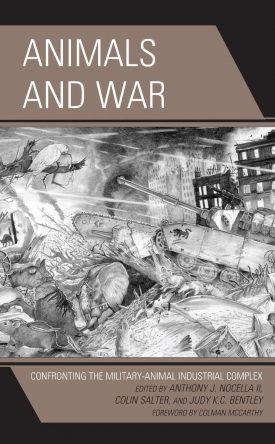 In this breakthrough volume, leading animal rights activists and peace anti-war activists shed a crucial light on the important connection between critical animal studies and peace studies. The leading scholar-activists in this volume are at the cutting edge of the struggle to resist the exploitation of nonhuman animals in the military. All social justice educators and activists would do well to read this book!

Animals and War is a wonderfully original contribution to the world of activism, social justice, and peace studies. An enlightening read for everyone!

“Animals and War: Confronting the Military-Animal Industrial Complex” is a seminal book for those who oppose war, those who fight for animal liberation, and those who do both. This essay collection powerfully exposes the use of animals as unwitting instruments and casualties of the battles that humans continue to wage against each other.If ever a text could move the animal liberation movement beyond its unjust categorization as “single issue,” this is it. Animals and War demands that all give attention to the ways in which manifestations of abuse, exploitation and domination are interwoven during war time, and it serves as a much needed rallying cry to put a cog in the machine that is the military-animal industrial complex.

– Dr. Kim Socha, author of Women,Destruction and the Avant-Garde: A Paradigm for Animal Liberation

In a world that has seemed to value things over life/ people, this book brings to the public s notice the often unheard voice of animals; animals who are treated in inhumane ways just to continue the war machine. This book gives us a much needed insight into an area of study rarely gone. Animals And Wars is the premier reader for animal studies and violence.

Animals and War takes us beyond critical theory’s usual concerns about war, amplifying our understanding–and our concerns–about human suffering to appreciate the impact on other animals of this most human, most destructive of practices.

Given the awful destructiveness of war, it is all too easy to think that its horrors are limited to its effect on human beings. This book makes the much-needed point that animals, too, have been both “instruments” of war and its victims, a trend that threatens to continue, even in our highly technological age. An important contribution to a previously neglected arena.

– Dr. David P. Barash, editor of the book “Approaches to Peace: A Reader in Peace Studies”

Discarding the anthropocentrism inherent to conventional antimilitarist analyses, Animals and War exposes the very bedrock upon which the reality of contemporary militarism has been constructed. As the contributors amply demonstrate, the lives of “lesser” species have been so utterly devalued in the name of tactical utility that, inevitably, the same degree of devaluation would be applied not only to “lesser” races, nations, and peoples, but ultimately to all forms of life. For anyone wishing to understand the thanatophoric nature of the societal dynamic we now confront, the connections made in this book are of profound importance.

– Ward Churchill, author of “A Little Matter of Genocide”

Animals and War is an eye-opening exploration of the profoundly destructive consequences of human chauvinism on nonhuman populations, and indeed the entire planet. This book is extraordinary in its theoretical depth and breadth, and in its engagement with the material reality of systematized death dealing and suffering, and yet it manages to inspire both hope and action.

As if war weren’t already evil enough in terms of human suffering, this collection documents what’s hidden in plain view: the wholesale and horrifying forced conscription and torture of animals by the military-industrial complex.

Excellent! The central arguments in Animals and War burn brightly, and illuminate a truth that will stay with you long after you have finished reading this challenging, timely and valuable addition to the literature.

A great read! Animals and War is an original contribution that documents how in horrific ways in war and in peace we humans dominate, exploit and horribly abuse all other species.

– Dr. Piers Beirne, author of “Confronting Animal Abuse” and other books on law and criminology

Congratulations to the writers and editors of Confronting the Military-Animal Industrial Complex for exposing and crticising this most appalling form of exploitation of other animals by the human species.

“Animals and War” offers a holistic and in depth analysis of the important social and military contributions nonhuman animals play, a contribution all too frequently born in blood and exploitation. This book represents the best of the emerging literature and facilitates new strides in critical animal studies and peace studies.