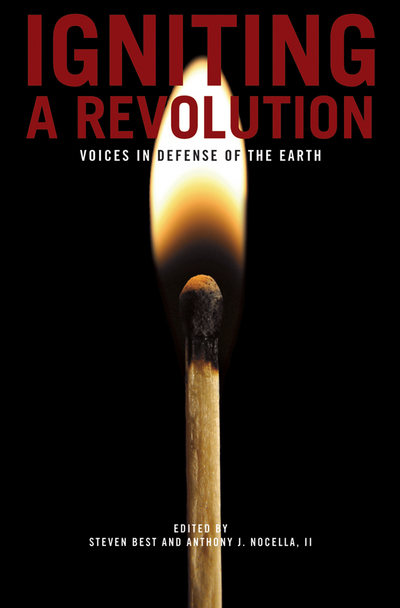 Igniting a Revolution: Voices in Defense of the Earth

As the destruction of nature reaches new extremes, resistance becomes ever more militant. Radical environmental groups are front page news. From laboratory bombings to the destruction of ski resorts, this emerging new militancy has been steadily upping the political ante. Authorities have responded in kind, handing down unprecedented heavy prison sentences for acts of property destruction. Congressional committees have been convened, the FBI has put revolutionary environmentalists at the top of their domestic terrorism list, and the “terrorists” themselves promise bigger and more spectacular assaults in the future. This anthology features a range of voices—from academics to armed revolutionaries—that explore this new form of political struggle. The first book of it’s kind on this increasingly important topic!

“Before his 1969 assassination, Chairman Fred Hampton of the Black Panther Party in Chicago famously remarked that, ‘When one of us falls, 1000 will take his place.’ This book proves Fred’s point. No matter the degree of repression visited upon it, the spirit of revolution cannot be quelled.”

— Ward Churchill, author of On the Justice of Roosting Chickens

“Terrorists or Freedom Fighters? exposes readers to compelling ideas that will undoubtedly make them think, and make them question. It is a valuable contribution to the most critical of public discourse.”

“One of the most powerful and thought-provoking books I have ever read. Please read it and ACT NOW!!!”

“An important book about the greatest revolution of all time, and a crucial contribution to animal rights literature and current social debates.”

This volume will interest any reader who wishes to hear directly from some of the leading intellectuals, activists and prisoners involved in these movements. The insights gained by listening directly to these voices…can hardly be overestimated.
– Dr. Bron Taylor, from the preface

Can extralegal means justify an end? The future of terrestrial life itself may depend on whether or not serious debate on that very point is put back on the public agenda. Igniting a Revolution threatens to do just that.
– Chris Hannah- Propagandhi

Only in a society this removed is love a revolutionary act. Read this book, change your heart. Gen 1:29

This book is both a protest against human greed and arrogance and a call for revolutionary action to reverse the accelerating pace of our planet’s destruction.

– Charles Patterson- Author of Eternal Treblinka: Our Treatment of Animals and the Holocaust

In an age of insurgent conservativism, fundamentalism, and militarism, it is more than heartening to come across a hopeful book that reminds us of this planet’s REAL “coalition of the willing”: the diverse cross-section of human beings who adamantly refuse to allow corporations and bad governments to destroy Mother Earth. These writings put to rest the lie that sane environmental polices are impossible to achieve or that revolutionary activism is a thing of the past. Reading this book will not only assure you that a better world is possible, but that its realization is a desire of the majority.

Best and Nocella’s volume is unlike any other work available on this topic. Igniting a Revolution is a profoundly important and timely volume, and one that I and many other scholars in the field will find extremely useful.

There’s no way that anyone can agree with everything laid out in this collection. But there is no way, either, that we can afford to ignore these varied voices, because the one sure path to destruction is that of business as usual.

This radical book seeks to uncover the roots of the environmental crisis we’ve created in search of solutions to what its contributors identify as in great part our lack of emotional bonds to the earth. Igniting a Revolution provides a stimulating sounding of ideas to help us decide what courses of action to take.

Igniting a Revolution is a collection of essays which will stimulate and challenge even the most hardened of cynics to reassess their thinking on many levels.

Their tactics are controversial, and are often labeled as violent, but there is no doubt that these insurgents represent the new cutting edge of the movement for a healthy planet and a just peace with nature. We may not agree with their tactics, or even their claims that the destruction of property is justified by our dire circumstances, and is ethical and essentially non violent, but we ignore their message of crisis and hope at our own peril.

As we face unprecedented ecological crises, along with growing political violence and state repression, revolutionary environmentalists claim that another world is possible. This book promises important insights into radical alternatives and principled resistance.

A must read book for anyone interested in saving the world.