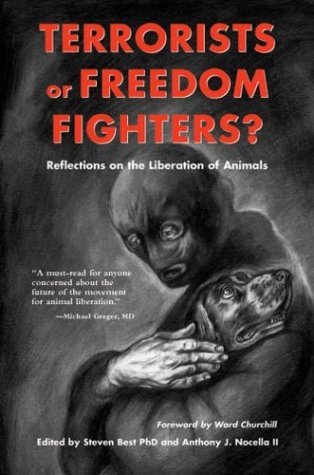 Terrorists or Freedom Fighters? Reflections on the Liberation of Animals

The first anthology of writings on the history, ethics, politics and tactics of the Animal Liberation Front, Terrorists or Freedom Fighters? features both academic and activist perspectives and offers powerful insights into this international organization and its position within the animal rights movement.

Calling on sources as venerable as Thomas Aquinas and as current as the Patriot Act—and, in some cases, personal experience—the contributors explore the history of civil disobedience and sabotage, and examine the philosophical and cultural meanings of words like “terrorism,” “democracy” and “freedom,” in a book that ultimately challenges the values and assumptions that pervade our culture. Contributors include Robin Webb, Rod Coronado, Ingrid Newkirk, Paul Watson, Karen Davis, Bruce Friedrich and others.

“Terrorists or Freedom Fighters? exposes readers to compelling ideas that will undoubtedly make them think, and make them question. It is a valuable contribution to the most critical of public discourse.

“One of the most powerful and thought-provoking books I have ever read. Please read it and ACT NOW!!!

“An important book about the greatest revolution of all time, and a crucial contribution to animal rights literature and current social debates.