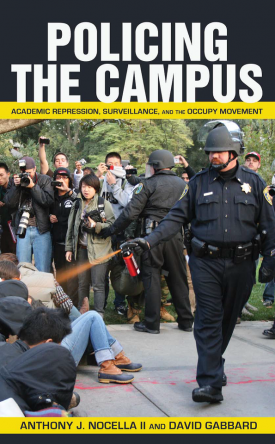 Policing the Campus: Academic Repression, Surveillance, and the Occupy Movement

With the rise of the corporate university and the academic industrial complex, colleges and universities throughout the United States are becoming monitored, armed, gated, and contracted out in the name of security. Policing the Campus is a collection of essays by activist academics and campus organizers from a variety of fields and movements. The book fully explores how higher education has entered a state of academic repression. In this new Occupy Wall Street era, higher education mirrors the problems that plague urban schools in poor communities, including metal detectors, random locker searches, drug-sniffing police dogs, in-class arrests, and security guards at every major entrance. Policing the Campus is a wake-up call to protect higher education as a bastion of free thought, strategy, and challenge for the 99%, and not preserve it as the privilege of the elite 1%.

Foreword: This Is Your Mind on Lockdown
Christian Parenti

Introduction: Canary in the Coal Mine
David Gabbard

1. Arrests and Repression as a Logic of Neoliberalism
Jason Del Gandio

5. Of Accountablity, Surveillance, and Fear: Speaking Out and Losing My Job
Barbara Madeloni

6. Cameras and ID Card Swipes:
Privacy and the Cultivation of the Virtual Self
Richard Van Heertum

8. We Are All Hokies: Surveillance Culture and Communication Technologies on a Post–Virginia Tech Campus
Caroline Kaltefleiter

10. The College Campus as Panopticon:
How Security and Surveillance Are Undermining Free Inquiry
Joe Lewis

PART III.
FROM DEFENDING PUBLIC EDUCATION TO THE OCCUPY MOVEMENT

12. Higher Ed on a Slippery Slope: Pulling It Back from the Brink of Tyranny
Maura Stephens

Higher education is the next iteration of the war on terror. The rhetoric used by our government has become the next frontier of surveillance attempting to silence the academy. Gabbard and Nocella take us deep inside these mind fields and show us the new “big brother”at every turn. Yet, they end with a pedagogy of occupy the classroom and show how some universities are generating a climate of resistance.

Policing the Campus should enlighten, enrage, and empower us all to confront the militarization of higher education and transform our colleges and universities into what they are supposed to be: spaces of learning and liberation.

— Dr. David Naguib Pellow, Don Martindale Professor of Sociology, University of Minnesota and co-author (with Lisa Park) of “The Slums of Aspen: Immigrants vs. the Environment in America’s Eden”

Whether you agree or disagree with their conclusions, the essays in this volume are certain to inspire a much needed dialogue about the effects of police and military presences on college campuses. Everyone interested in the current state of higher education and its role in democratic society is sure to be equal parts intrigued and incensed by what they find within these pages.

We live in a time of unprecedented clampdown on student dissent and ‘policed pedagogy,’ super-surveillance at colleges across the planet. This book, concentrating on realities of repression largely in the U.S., will galvanize researchers elsewhere to investigate and struggle against similar forms of academic fascism engulfing campuses worldwide.

As one who has had his classes infiltrated over the years by students from right wing organizations -— solely for the purpose of disrupting (and reporting on) my course content, I cannot say enough about the timeliness and importance of this excellent work. Academic freedom has been under attack for many decades and in many ways. Much ground has been lost that needs to be regained. Hopefully this book will contribute toward the accomplishment of that goal.

Nocella and Gabbard have done it again! Policing the Campus minces no words and pulls no punches to focus the scholarly microscope on the repression and suppression of intellectual thought and action. Faculty and students alike will view their educational opportunities and work in a new light through this startling exposé of academic policing.

In Policing the Campus, Gabbard and Nocella make a critical and radical intervention that challenges the policing and surveillance of higher education. If the influence of military, corporations, and law enforcement— and the creation of a police state on every campus— go unchecked, it will be impossible for democratic and free education to flourish.

— Dr. Donald Easton-Brooks, Associated Dean of the School of Education, Hamline University and Editor of the Journal for Critical Urban Education

This book is a wake-up call for faculty to critically examine the extent to which corporations, conservatives, quasi-mental health professionals and the military have infiltrated higher education in a quest to suppress a liberal education-— our raison d’etre. Students and faculty are scrutinized for their behavior, and emergency response behavioral teams are kicked into action at the slightest indication of a mental health issue. “Deviance” is back in fashion, and we are all at risk from this new SWAT team.

A must read for professors, students, staff, administrators, and the general public concerned about the future of education and democracy. Finally, here is a book that examines the police state that is growing on every campus.

Policing the Campus is a pointed collection that takes aim at the disciplinary logics and practices that increasingly dominate higher education. The essays that explore the relationships between campus activism and the Occupy movement are especially timely, but the entire book is a fruitful contribution to the debate over the freedom of the university in the 21st Century.