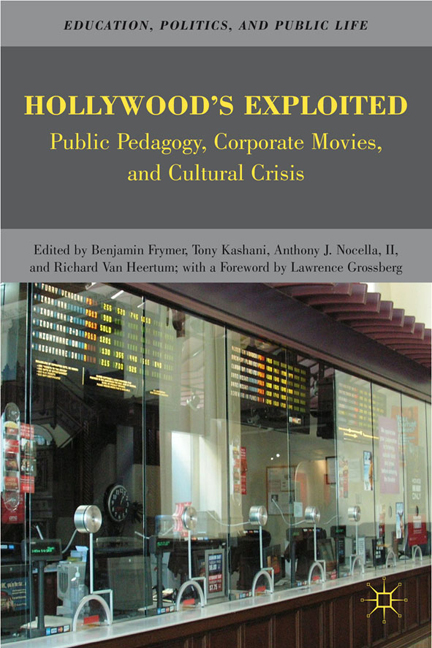 “This is an important text that sheds a powerful new light on the exploitation industry we have come to know as Hollywood. It is a book that demands a close reading.”

“A rich and varied collection of commentaries, offering insightful critiques and sociological sensibilities. Of interest to ordinary film buffs and cinematic specialists alike.”

“For readers of Hollywood’s Exploited, the wisdom will be gained, not received. Against conventional grains, this is an anthology of thoughtful inquiries and tough-minded assessments – challenging us to think anew, and more deeply, about what we see in movies.”

–Norman Solomon, author of The Habits of Highly Deceptive Media; War Made Easy; and The Trouble with Dilbert

“This smart collection reminds us that whatever reality we might observe and investigate is merely the starting point of thought, struggle, and action; standing directly next to whatever the case may be is always what the case could be or should be. Frymer, Kashani, Nocella, and Van Heertum have assembled a mighty chorus urging us to go beneath surface meanings and instant impressions, official policies and commercial messages, political propaganda, controlling myths, received wisdom and the dogma of common sense. We begin to understand, then, the root causes and social context of the taken-for-granted all around us. This is a call-to-arms.”

–William Ayers, Distinguished Professor of Education, University of Illinois at Chicago and author of To Teach

“This book offers the clearest evidence yet of how a supposedly ‘liberal’ Hollywood trades in racial, sexual, and other stereotypes as a matter of course, and why such portrayals of marginalized and otherwise disempowered groups have a profound impact on the public’s appreciation of the various forms of social and political discrimination they still face.”

–Mark LeVine, Professor of Middle Eastern History, University of California, Irvine and author of Why They Don’t Hate Us and Heavy Metal Islam