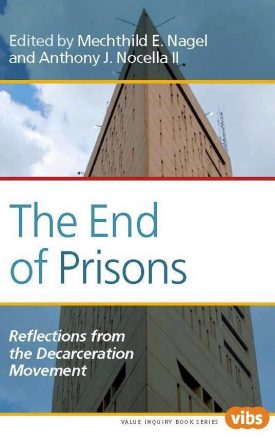 The End of Prisons: Reflections from the Decarceration Movement

The End of Prisons: Reflections from the Decarceration  Movement
Mechthild Nagel and Anthony J. Nocella II

This book brings together a collection of social justice scholars and activists who take Foucault’s concept of discipline and punishment to explain how prisons are constructed in society from nursing homes to zoos. This book expands the concept of prison to include any institution that dominates, oppresses, and controls. Criminologists and others, who have been concerned with reforming or dismantling the criminal justice system, have mostly avoided to look at larger carceral structures in society. In this book, for example, scholars and activists question the way patriarchy has incapacitated women and imagine the deinstitutionalization of people with disabilities. In a time when popular sentiment critiques the dominant role of the elites (the “one percenters”), the state’s role in policing dissenting voices, school children, LGBTQ persons, people of color, and American Indian Nations, needs to be investigated. A prison, as defined in this book, is an institution or system that oppresses and does not allow freedom for a particular group. Within this definition, we include the imprisonment of nonhuman animals and plants, which are too often overlooked.

1. The Rise of the Terrorization of Dissent: Critical Criminology, Stigmatization as a Prison, and Responding to Political Repression
Anthony Nocella II

2. “We don’t want your kid in our school”: Personal Encounters from the Intersection of Schools and Prisons
David Gabbard

4. From Behind Bars: Social control and incarceration of humans and nonhumans
Jenna McDavid

5. “The Renaissance of Slavery: Blackness, White Supremacy, and the Criminalization of Culture”
Ernesto Aguilar and Melissa Chiprin

6. Imprisoning Non-U.S. Citizens: The Consequences of the War on Terror and the Massive Detention of Immigrants
Ute Ritz-Deutch

8. Prison abolition and deinstitutionalization: Learning from the Past, Lessons for the Future
Liat Ben-Moshe

WHAT PEOPLE ARE SAYING ABOUT “NO MORE PRISONS”

No More Prisons is not your average prison abolition book. Rather, it challenges the very idea of what a prison is as it exposes the ways in which all in industrial Western-colonial culture reside in one prison or another. Most significantly, it challenges the concept of who is incarcerated, expanding that idea beyond human animals to include nonhumans and plant life as well. This is a timely book that anyone should read who is concerned with new methods of exposing, challenging and subverting domination.

– Dr. Kim Socha, author of Women, Destruction and the Avant-Garde: A Paradigm for Animal Liberation

This book dramatically raises the stakes in terms of what counts as prisons, who comprise the incarcerated, and what needs to be done to bring an end to prisons. This powerful and path breaking treatise will help to redefine the prison abolition movement and chart an urgent course for revolutionary transformation.

No More Prisons is an outstanding book that asks the reader to rethink how all forms of life, human or nonhuman, are locked in prisons and how this confinement is resisted. No More Prisons is an excellent critique of the affects of institutions such as schools, jails, nursing homes, daycares, marriage, national parks, and zoos.

No More Prisons takes a radical and imaginative approach to the abolition of prisons. It moves beyond the prison industrial complex to an inter-sectional critique of all oppressive institutions. It argues that “the prison” is not just a physical architecture, but a vicious, unjust approach to social life. This book is thus a call to action. Read it, discuss it, and use it to change the world!

Confronting captivity suggests strong acts of willing and thinking and doing. All three endeavors are thoughtfully and creatively embodied in No More Prisons as its editors and contributors forge intersecting and complimentary paths towards freedoms.

No More Prisons serves as a wake- up call for many and a pedagogical tool for those interested in teaching to liberate people from the oppressive ways of the Empire in the context of the prison-industrial complex. This book is a must read for anyone concerned about social justice.

– Dr. Tony Kashani, author of Lost in Media: The Ethics of Everyday Life

No More Prisons: Reflections from the De-Institutionalization Movement makes an outstanding contribution to the existing literature. It is timely, critical, and scholarly in all the right places and will prove essential reading for a wide multi-disciplinary audience situated both within and beyond the academy.

No More Prisons takes aim at the intersecting forms of juridical, cultural, and socioeconomic power that organize and justify the biopolitics of oppression. In pushing readers to reconceptualize and confront the cartography of carceral spaces in which this power is rendered both visible and unseen, Nocella and Nagel remind us that while life is being increasingly penned in and blocked off, every lock has a key and every wall a crack.

This book takes a critical look at social justice. It forces us to ask ourselves ‘what constitutes imprisonment and what role do we play in imprisoning ourselves and others’. The book directs us to think about, our responsibility in respecting all elements of life and impact of everything and people we encounter.

A great addition to the ongoing critique of our justice system, asking questions too often ignored and providing unique new perspectives that force the reader to rethink our notions of what is right and wrong.