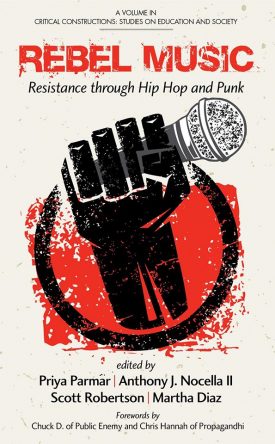 Arising from the street corners and underground clubs, Rebel Music: Resistance through Hip Hop and Punk, challenges standardized schooling and argues for equity, peace, and justice. Rebel Music is an important, one-of-a-kind book that takes readers through fun, radical, educational chapters examining Hip Hop and Punk songs, with each section addressing a particular social issue. Rebel Music values the experiences found in both movements as cultural capital that is de-valued in the current oppressive, standard, test-driven, rule-bound, and corporate schooling experience, making youth “just another brick in the wall.” This collection is a “rebel yell” to administrators, teachers, parents, police, politicians, and counselors who demonize Hip Hop and Punk to listen up and respect youth culture. Finally, Rebel Music is a celebration of radical voices and an organizing tool for those who use music to challenge oppression.

CHAPTER ONE
“My Life” by The Game & Lil Wayne
Don C. Sawyer III and Hasan Stephens

CHAPTER SIX
“Hero of War” by Rise Against
Scott Robertson

WHAT PEOPLE ARE SAYING ABOUT THE BOOK

Punk rock and Hip Hop were militant late 20th Century American subcultures that redefined all notions of art and entertainment. This intellectual, but not over intellectualized work puts it all in a modern context. “Rebel Music” indeed!

As an English professor who explores social justice issues with her students, as well as analyzes music as poetry, Rebel Music is the perfect text to bring those issues together in one inspiring volume. Indeed, music in its many forms is a ‘universal language,’ so I see this collection fitting into any curriculum, from middle school to higher education.

Rebel Music demonstrates not only the importance of music as a vehicle for fighting neoliberal capitalism and all of its attendant guises of destruction, but it offers a mode of furious hope form which a new generation of youth can be inspired.

Working in education, especially inner city schools, requires a certain understanding. Much of that understanding lies in the history of oppression, such as racism and poverty. Rebel Music: Resistance Thorough Hip Hop and Punk uniquely and brilliantly makes that history visible and highlights ways youth resist and rebel. If you want to know more about youth culture read this book.

An interesting and thought provoking look at the parallels between punk and Hip Hop.

As someone who got through college writing about rock-n-roll, as someone whose own politicization came from John Denver, Bruce Springsteen, and The Clash before it passed through Noam Chomsky and Paulo Freire, I found this book to be a treasure. I’m passing it on to my kids!

Insightful and thought provoking, Rebel Music serves as an excellent guide to empowering all who are striking a beat. A must read for anyone interested in the connection between music, politics, and culture.

– Dr. Joe Leeson-Schatz, Lecturer and Director of Speech and Debate at Binghamton University

Rebel Music does a wonderful job of teasing out the liberatory dimensions of punk and Hip Hop, and translating notions of oppression, resistance, and rebellion into an exciting, concrete, and accessible language for a wide audience. The authors and editors address everything from the politics of music to the politics of subcultures, communities, identity, and youth movements. Such timely and timeless topics will surely speak to the hearts and minds of many people and inspire reflection and action for social justice.